Survivor and Memorial Walk for my Father Brian Companion 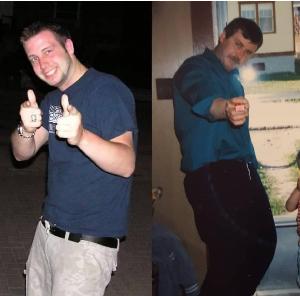 It was just a couple years ago I lost my dad, best friend, father, and hero to Heart Failure. I am walking in memory of him and could not be more proud.

I've seen him cry on very very few occasions but ones I truly remember were when i went to college, when i went to the military, when I was married, and the last time when he looked at me when I had to make the decision to intubate to try one last treatment to try to get his heart working and get him out of the hospital. Hardest thing I have ever done in my life and that will probably be the hardest thing I had to do was say good bye to him. But now I dont see why I should say bye because my dad was cremated and me, my sister, and my brother wear a lil of him around our necks so that he will always be with us.

He was not the most athletic man but he would work through anything, any type weather, any type of work just to help someone, didnt even matter if he didnt like them. He just loved to help, support his kids and do the best by his family regardless of situation.

This walk I will be doing it with him and we will do this together and pass that finish line.

But please help me MEMORIALIZE HIM on this walk while I walk for him and myself as a SURVIVOR.

It was only just over a 6 years ago that I survived Heart Failure, it came out of nowhere and hit me like a MAC truck. What made me go into the hospital was myself waking up violently gasping for air that just was not coming, it happen twice before I spend hours in the washroom throwing up fluid violently. After that settled I drove myself to the hospital and checked in, not knowing that the next few weeks I was going to be in the hospital. That first night was something else that I have never felt with before I just kept getting worse and worse and worse, that I gave Casper the friendly ghost a run for his money. After finding out that I'll be in the hospital for more then a few days I was transferred into the Intensive Cardiac Ward, by the time I was moved there my body was In a state of shutting down and I did not look alive at all just down right bloodless in colour. My one and only Love Cheryl stayed as long as she could before the nurses had to get her to leave, but I think having that and her there was the main thing that kept me fighting.

Every morning like clockwork I had blood taken and tests after tests booked. When tests came in I found that my heart was only at 12%, my liver was failing, I had a very enlarged heart, and my kidney was also in a state of failing.
Week after week went by and I was the transported for surgery in London to have a Angioplasty which was done through the vine in my groin hip area and it was not painful at all until after it was done because the nurse had to apply pressure on artery for 2 hours and that was soooooooo much pain. But I did find out that I did not need anything and nothing was blocked.
Weeks went past, and little by little I was able to get good enough to get out of the hospital.

Since this all happen I have came along way and still have a very long time to go. Just this passed year I got more results and they were good and bad. They were that in 6 months I did not improve one bit and the other was that I was one percent away from getting an ICD. My percentage of my heart right now is tottering on percentage of 30 below which is the worst news ever right now but I am fighting.

Months later I was in the gym with my trainer Clint and started my workout. Minutes into it I felt really off, so being me I was like I have to go to the washroom. As I was walking to the washroom it felt like I was drunk, my vision, and walking, stumbling into the washroom and then there I go. My trainer Clint sensed something was wrong and I am glad he followed me and actually caught/helped my body to the ground as I passed out. When I woke up paramedics where there hooking me up on the stretcher and bring me to the hospital.

I was then in the hospital for 2 weeks as they did more tests, and set an appt to implant the ICD in my chest for my heart. There was no way I was getting away with not getting it now. When the reports came back I was no longer tottering on the percentage of 30 below it was and is now around 25 below.

Flash forward years to this year. I am now just not fighting to get better but I am now fighting to get as fit as I can so that I can recieve a heart transplant and have the best odds at accepting it. Thats working towards getting fit and losing 60+lbs to be at around 220 - 230 lbs.

It is almost 6 years since it happen and I am still fighting and will NEVER GIVE UP!

So I am asking you to HELP ME HELP OTHERS by Donating to Heart and Stroke.

Your donation will directly improve the lives of Canadians through preventing disease, saving lives and promoting recovery.