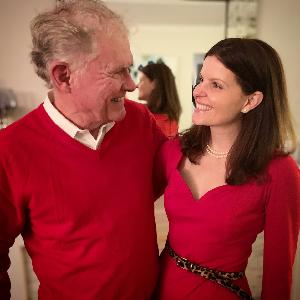 This year I am so proud to be co-chairing TD for Heart and more fully supporting a cause so important to me.

This is a photo of my dad and I taken at Christmas. It’s a photo that almost didn’t happen, and if you look closely, you can see a 6 inch scar running up my dad's neck. 2 Years ago in May, right after he turned 75, my dad and I were at my nephew's confirmation when he told me that he was having trouble seeing out of his left eye. He thought his recent cataract operation had made his lens slip. It didn’t sound quite right to me and I asked him if he had had a stroke. Even offered to drive him to Sunnybrook which was 5 minutes down the street. He laughed it off, said he didn’t feel dizzy; said his speech wasn’t slurring and told me he would see his doctor early the next morning.

As soon as he called his doctor that afternoon he was rushed to emergency and had a 3 hour surgery where his chance of survival was 67%. That’s a 33% chance he wasn’t going to survive. In fact, my dad was a ticking time bomb. He had had a stroke and was due for another one at any time. But thanks to the recognition of his symptoms by his doctor and the quick tests and attention he received at Sunnybrook, that wasn’t where our story ended.

We have come a long way in the education, awareness, detection and care for heart disease and stroke. But we still have so far to go. As I dug deeper into the stats I was surprised that heart disease is the number one cause of death in Canada for women over the age of 55. Women are more likely to die from heart disease than from any other disease and a woman dies of heart disease in Canada every 20 minutes. And yet, two-thirds of heart disease clinical research still focuses on men. The Heart and Stroke foundation is working to change this and I am so thrilled to be a part of that. And thanks to how far we have already come, my dad will be a part of my life for many years to come. Please help me fund this important research and meet my fundraising goal.