START A FUNDRAISER
donors have given to events, raising 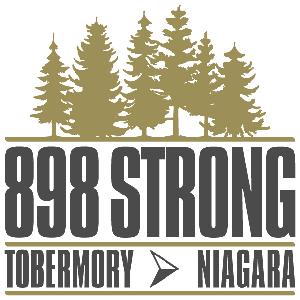 My life changing journey began in November 2012, shortly after being told that I had a birth defect in my heart. Instead of having a tricuspid aortic valve, I have a bicuspid aortic valve (BAV), which is an aortic valve that only has two leaflets, instead of three. (The aortic valve regulates blood flow from the heart into the aorta. The aorta is the major blood vessel that brings oxygen-rich blood to the body. At the time, I thought it was nothing more than a sinus infection or strep throat, but after feeling like my body was shutting down and the constant occurrence of rigor shakes, which is an episode of shaking or exaggerated shivering that can occur with a high fever, I decided to make an appointment with my doctor. Through my doctor, I was admitted to the Critical Care Unit at Woodstock General Hospital a few days after my appointment in late November, for what doctors believed was Streptococcus Pneumoniae. There I was administered continuous antibiotic for four days.

In December of that year, I met with Dr. Diaz, a cardiologist at University Hospital in London, Ontario. There, he performed a Transesophageal Echocardiography (TEE), a test that uses high-frequency sound waves (ultrasound) to make detailed pictures of your heart and the arteries that lead to and from it. I was so scared. As a new dad of a baby girl, I had so many fears; fear of the future, fear of what may happen next, and fears that my daughter might have the same condition. All of these thoughts and fears were new to me. I was so healthy. I was confused as to how I came to have this.

Over the course of 2013, I met with Dr. Samuel C. Siu at the London Health Sciences Centre (LHSC), who continued to monitor my condition. I went through a gamut of testing:  ECG, MRI, stress tests. They also monitored my oxygen intake and took various blood cultures. When my oxygen intake continued to drop at an alarming rate, I was referred to a surgical colleague of Dr. Siu’s at Toronto General, named Dr. Tirone David.

In April 2014, I met with Dr. David at Toronto General Hospital, where he performed another TEE to view the extent of the damage to my bicuspid aortic valve. A month later, surgery was performed to replace my bicuspid aortic valve with a Hancock bio prosthetic #27 aortic valve, as well as a replacement of my posterior aortic sinus. Dr. David attempted to replace my aortic valve using the Ross procedure (or pulmonary autograph), where a diseased aortic valve would be replaced with my own pulmonary valve. A pulmonary allograft (valve taken from a cadaver) was then used to replace my own pulmonary valve. This is the operation of choice for infants and children, but its use with adults remains controversial. Unfortunately, my cusps were not satisfactory for repair as they were extensively damaged. The left cusp was frail and most of my right cusp was missing. After these findings, it was determined that I actually had a remote infection called Bacteria Endocarditis. The findings confirmed the presence of a bicuspid aortic valve with the fusion of my left and right cusps.

After the surgery and recovery, I felt like my old self again. I was able to flow back into my normal lifestyle with zero side effects.

Four years later, on April 3, 2018, I had a follow-up MRI. This was possibly the point when I again contracted Bacteria Endocarditis (Gram positive bacilli). Over the six months after my MRI, I began noticing my energy level dropping dramatically. I didn’t think much of it, and chalked it up to aging, but that changed on October 19, 2018. I woke up at 1 am with major pain in my right ear, followed by a migraine centralized behind my right eye. I waited it out for two more hours and attempted to move from the bed to lay on the couch, when suddenly, I lost all bodily function and mobility on my left side and had complete paralysis. I then crashed into the wall, causing me to fall and hit my head quite severely on a table. I was unconscious for a few seconds until my friend found me lying on the floor.

What I can remember from that morning is foggy. I do remember being afraid that I was dying. I remember the look of sheer terror on my friend’s face. I was so scared that this could be the end. Paramedics were called and I was rushed to Brantford General Hospital, where the doctors failed to thoroughly and adequately treat my symptoms. I was released four to five hours later after only having my blood pressure and my heart rate checked with an Electrocardiogram (ECG or EKG). I was not checked for concussion protocols (my left ear and the back of my head were bleeding and I had bruising on my left jaw and quad). I was scared, confused and felt foggy and dazed – I had no idea what was going on. Yet, I was released without transportation arrangements. It took hours to get feeling back on my left side, I feared the worst and wondered if it was related to my heart again - after all those years thinking I was in the clear.

In October 2018, I had an MRI of my head, which revealed brain damage. I was not able to work at this point and I felt defeated.

In November 2018, a TEE performed by Dr. Diaz revealed that the bacteria had left an abscess on my prosthetic valve. From there, doctors discovered that part of the Bacteria Endocarditis broke off and created micro blood clots, which caused me to have a series of strokes, which explained the brain damage. My prosthetic valve will have to be replaced in March of this year.

Before all of this took place, I believed I was in excellent health. I had taken up marathon running in 2010 and I had been making intentionally healthy nutrition choices since then. I was seemingly the healthiest person I knew. I believe now that this is what has saved my life. Exercise and healthy eating has given me fuel and determination to get through this, despite the hurdles I’ve faced.

I suppose I could feel sorry for myself and wonder, “why me?”, instead, I’m choosing to share my story to hopefully inspire others to take their health seriously, because without it, nothing else really matters.

To say I run for a purpose or for just passion is an understatement to say the least. I have come very far, and the way I view my health has evolved over the past seven years. I push my physical abilities to the extreme, but I also know what my body can and cannot do. I take extreme pride in my health and the shape I’m in, both mentally and physically. This will give me the strength to face what is still to come.

I go under the knife again in the near future, as I will need to have full open-heart surgery to replace the valve sooner than anticipated. There’s no telling exactly how long it will take for me to recover, but I plan on doing so as quickly as possible!

To raise awareness for illnesses like mine, and funds for important research in heart and stroke, I will run an 898 kilometer trek from Tobermory to Niagara this fall. I plan on doing most of the run on my own, but some friends and family will join in along the way to show their support.

To donate to heart and stroke, visit: support.heartandstroke.ca/goto/898strong.

Although the 898 kilometers is symbolic of the long road I’ve been on with my health, it also represents my commitment to continued health and wellness and my passion to show others that with determination, anything is possible.I believe that everything happens for a reason – good things and bad things, and everyone has a purpose in life. Some people realize what their purpose is, but many do not. I’m one of the lucky ones. I know what my mission is, though getting to this realization came from the most difficult seven years of my life.